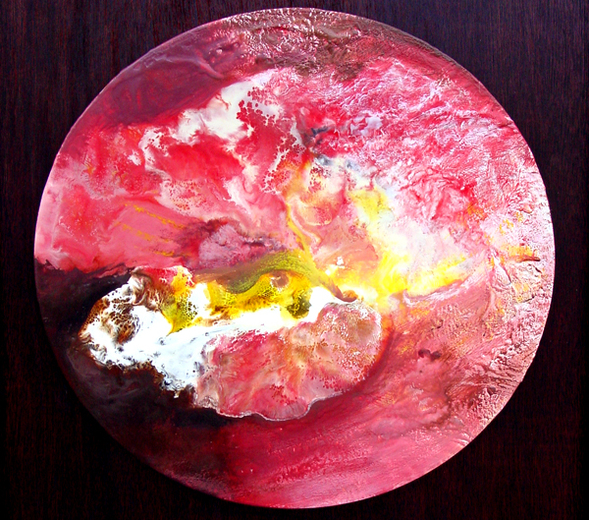 Zen of Zero Point, The Age of Enlightenment Series
Encaustic on Wood Panel
23" Diameter,  2011
Morphogenesis:  The biological process that causes an organism to develop its shape.

Rupert Sheldrake, and English biochemist is known for his theory of morphic resonance.
Sheldrake proposes that the process of morphic resonance leads to stable morphic fields,
which are significantly easier to tune into. He suggests that this is the means by which simpler organic forms
synergetically self-organize into more complex ones, and that this model allows a
different explanation for the process of evolution itself, as an addition to
Darwin's evolutionary processes of selection and variation.
– Wikipedia

I believe one’s thoughts creates the resonance which creates form.
Scientists are now establishing a language that clearly bridges spirituality with quantum physics.
Masaru Emoto has proven this in his research with how water crystals
change based on words we not only speak, but think.

– C. Goodridge
©1997-2022 Carolyn S. Goodridge. All paintings, images and text by Carolyn Goodridge are copyrighted and protected by the Berne Convention. Any attempt to copy or make a painted imitation or derivation of this piece of artwork is against the law.