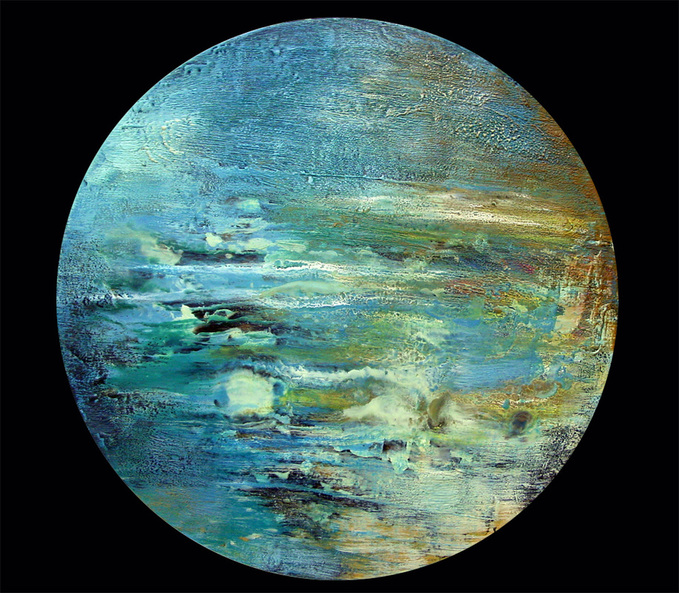 Encaustic on Wood Panel
20 1/2" Diameter, 2011
"Maya's Illusion"  is from the Zen of Zero Point, Age of Enlightenment Series.
"Maya" is a Sanskrit word which means "illusion."
So this painting deepens the meaning of illusion to illusion's illusion itself.
Maya is also the name of Buddha's mother. In Hinduism and Sikhism,
Maya is the principal concept which manifests, perpetuates and governs
the illusion and dream of duality in the phenomenal Universe.

Maya is also the Greco-Roman Goddess of the Earth.
So this painting has a rich meaning. It depicts our Mother Earth,
her oceans, clouds, mountains, sunsets and soil.
Even though Maya is blue and beautiful, she is still an illusion.
One in which we all live and put our attention on.

There are hints of horizontal lines and vertical brush strokes in this painting.
This signifies the String Theory, which tries to explain our universe as
God's harmonic music in hyperspace.

I feel science will eventually catch up to the
spiritual adepts which point to the truth of NOW.

- C.S. Goodridge
©1997-2022 Carolyn S. Goodridge. All paintings, images and text by Carolyn Goodridge are copyrighted and protected by the Berne Convention. Any attempt to copy or make a painted imitation or derivation of this piece of artwork is against the law.