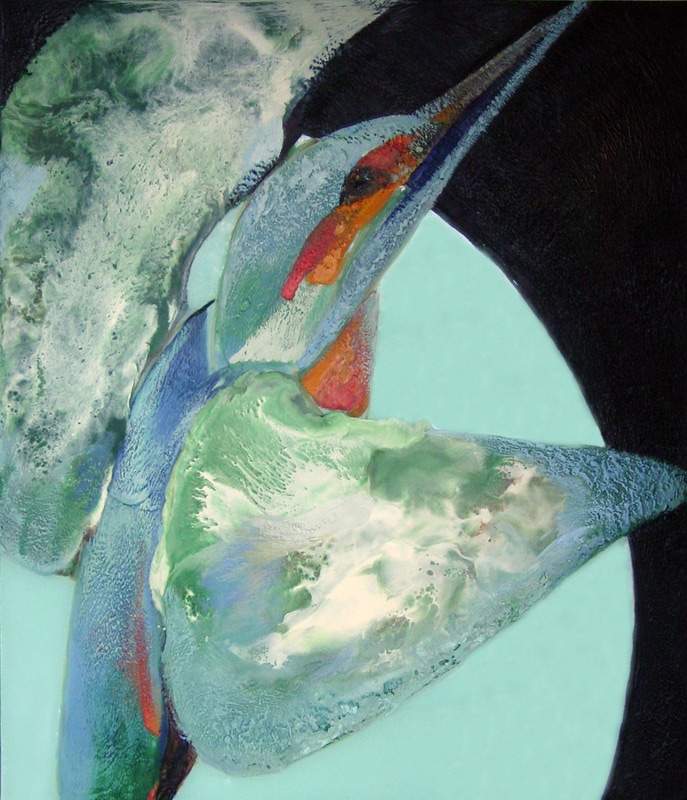 Shiva's Dance, The Flight Series
Encaustic and gold leaf on greenhouse grade glass (diptych)
28” h x 22” w, 2017
​Shiva is Sanskrit: Śiva, lit. the auspicious one; is one of the principal deities of Hinduism. Shiva is "the transformer." In Shaivism tradition, Shiva is the Supreme being who creates, protects and transforms the universe. In the goddess tradition of Hinduism called Shaktism, the goddess is described as supreme, yet Shiva is revered along with Vishnu and Brahma. A goddess is stated to be the energy and creative power (Shakti) of each. - Wikipedia

"For me, birds dance as they fly with one wing appearing as many.  As my spirit is that of a bird, I personify myself in this form, soaring upward to great heights of being, strong and sure on the wing.  Choosing the beautiful female kingfisher bird (Alcedo Atthis) seemed a fitting visual poem." - Carolyn Goodridge
©1997-2022 Carolyn S. Goodridge. All paintings, images and text by Carolyn Goodridge are copyrighted and protected by the Berne Convention. Any attempt to copy or make a painted imitation or derivation of this piece of artwork is against the law.